Despite the rapid development of "3D printing house" technology, most of them are ultimately limited to conceptual design or demonstration, and there are few buildings that can truly realize residence. The most important reason is that in most of the printing scenes, it is impossible to integrate "steel bars", which leads to“ 3D printing house "technology can only be manufactured as a single story building, which can not realize the real commercialization of the technology.
Retail price
0.0
element
Market price
0.0
元
Number of views:
1000
Product serial number
Quantity
-
+
Stock:
0
Category
返回列表

1
share
Product description
Parameters

Despite the rapid development of "3D printing house" technology, most of them are ultimately limited to conceptual design or demonstration, and there are few buildings that can truly realize residence. The most important reason is that in most of the printing scenes, it is impossible to integrate "steel bars", which leads to“ 3D printing house "technology can only be manufactured as a single story building, which can not realize the real commercialization of the technology.
According to the research and development work of "strengthening 3D printing building hardness material" in succession in the world. Among them, some scientists hope to replace steel bars with nano materials or carbon fiber elements, but this can significantly improve the project cost, and the building hardness of new materials has not passed the official strength test; at the same time, many scholars continue to pay attention to the research of 3D building printing scene of "reinforced + concrete" with a broader market.
In fact, this kind of "3D printing house" equipment with "reinforced + concrete" as the printing raw material has already come out, and it also comes from China.
In 2018, a series of world-famous media including CNN, NHK, Xinhua news agency and today's Russia reported one after another that "the world's first building with 'reinforced concrete' as the printing raw material was completed in Beijing". The main role of this news is Beijing Chinese land and Sea Technology Co., Ltd. (hereinafter referred to as "Chinese land and sea").

(the world's first on-site overall printing building with "reinforced concrete" as raw material)
Since 2015, based on the industrial value and technical pain point of the global "3D building printing" industry, the company has begun to focus on the land and sea of Chinese businessmen founded in 1989 with "reinforced concrete", and has been researching, developing and applying new technologies in the field of military construction for many years. " As the technical research and development of printing raw materials.
Through three years of dedicated research and development, the Chinese business, land and sea, has created three No.1 in the global "3D building printing" industry!
First of all, Chinese businessmen have conquered the current situation that only "small particle fine aggregate" printing can be completed in this field in the world. The 3D printer "nozzle" produced by them can spray "large particle heavy aggregate concrete" with stones;
In fact, in the buildings printed by Chinese merchants, land and sea have realized the combination of "steel bar + large particle heavy aggregate concrete", thus further improving the strength of the building, breaking the global industrial limitation that "3D printing houses" can only be "single layer";
In addition, with the support of the above-mentioned technical advantages, Chinese merchants, land and sea, have realized the industrial goal of "on-site overall printing" for multi-storey buildings with the equipment of "3D printing house" with independent intellectual property rights, making it a "global first" enterprise to realize the "commercialization" of 3D building printing.

(single building of "3D assembly building" of Chinese land and sea)
After solving many industry pain points and realizing the scene application of "on-site overall printing", Chinese merchants land and sea actively responded to the promotion requirements of the investor government on "prefabricated building". At the beginning of 2019, they launched the "3D prefabricated building" with the most advanced technology and the highest building hardness in the field of "prefabricated building" in the world.
It is reported that, unlike the traditional "prefabricated building" which will be built in advance, such as beams, plates, columns, walls and other building components, through the way of building blocks, the industrial mode of assembling at the construction site is different; the "3D prefabricated building" of Chinese land and sea is mainly based on“ 3D printing house technology, with the overall customized printing of "single building" in the factory, finally solves the problems of traditional "prefabricated building" such as wall cracking, uneven plate splicing gap, poor sound insulation effect, poor heat insulation effect, etc. by means of on-site assembly, and also provides a highly intelligent living space with "self regeneration" for residents Between.
It is understood that Chinese land and sea buildings, which take "steel bar + large particle heavy aggregate concrete" as the raw material and take "horizontal construction and vertical use" as the construction concept, are even more in line with human living habits, and the structural strength of the buildings is“ At the assembly site of 3D assembly building, the author found that each single building, such as dining room, bedroom, kitchen and bathroom, can be hoisted with only four lifting points in the assembly process of several tons or even dozens of tons. It can be seen that the "3D prefabricated building" has the advantages of "Alternation" and even higher than the cast-in-place concrete building in terms of strength and seismic resistance! 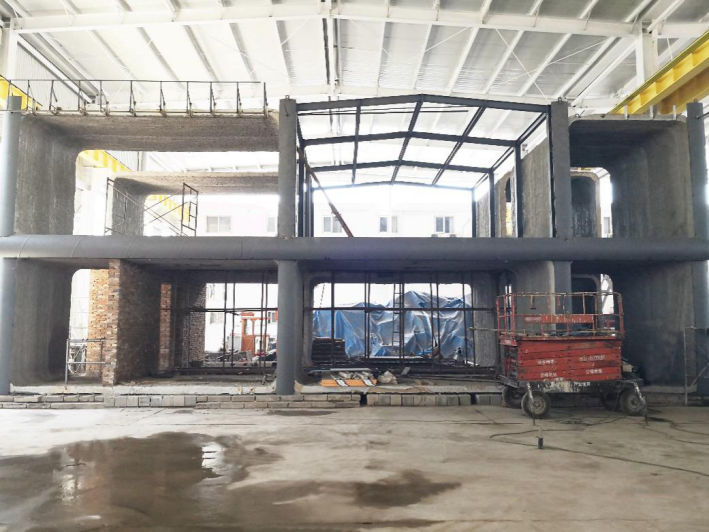 (multi story assembly site of "3D assembly building" of Chinese land and sea)
With regard to the market prospect of such "3D prefabricated buildings", the head of land and sea of Chinese business said that the factory customized mode of such buildings not only reduces the construction cost, but also changes the site construction cycle, and the type of assembly is more cautious. It can at least be used in the construction of rural residential base, and can also be used as a building accommodation of multiple formats such as cultural tourism real estate projects, urban public facilities, office co creation space, etc.
Based on the above two products for different levels, Chinese merchants will adopt the form of "high and low matching" to fully cover the construction printing market. Among them, the "on-site overall printing" products meet the industrial demand of high-end construction field; the "universal" Application of "3D assembly building" realizes "3D printing house" technology.
On the basis of full scene coverage of the product, the Chinese merchants, land and sea, are expected to actively develop the concept of "Cloud Application" of "3D building printing" in the future, and provide a "converged" collaborative development platform for all enterprises in the field of "3D building printing" with an open attitude of "win-win contract", so as to jointly promote the global rapid popularization of "3D printing house" technology.
Scan the QR code to read on your phone
We could not find any corresponding parameters, please add them to the properties table
Previous
Triangle Villa
Next
Thermal insulation wall

Founded in 1989, Beijing Huashang Luhai Technology Co., Ltd. is located in Fuhao Industrial Development Zone, Tongzhou District, Beijing, covering an area of about 18000 square meters. Relying on the correct business strategy and scientific management of the enterprise,
Chinese merchants are growing and growing. They have achieved their goals year by year with a steady style. Since 2003, they have been appraised as
"Shouxin enterprise" is one of the powerful enterprises in the same industry.